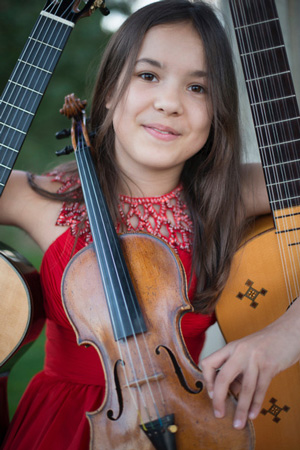 Catalina Pires, born on Dec.16, 2003, presented her outstanding talent very early. At the age of 6 years, she obtained her first violin lessons. It did not take long before she grabbed the audience’s and critics attention. Due to her intuitive musical talent, she quickly began to replay the pieces that she learned on the violin on other instruments, and discovered her enthusiasm for the guitar. Since 2011, Catalina is guitar student of Walter Abt in Munich and has since then performed at numerous prestigious guitar festivals and charity concerts. With only 9 years, she won several special prizes at her first international guitar competition as the youngest participant. Due to her musical diversity and extraordinary combination of the two strings instruments, she has won numerous other prestigious awards, including exclusively first prices at the German Youth competition Jugend Musiziert. Along with her exceptional musical language, she captivates her audience again and again at various concert performances, reaping wide acclaim and rave reviews. In October 2015, the extraordinary gifted guitarist appeared in her first performance with orchestra, playing the famous Concierto de Aranjuez  together with the Philharmonic Orchestra Bad Reichenhall. Her first CD YOUNG GENIUS (shop/abt-music.com) was supported by the International Foundation for Culture and Civilization in Munich.