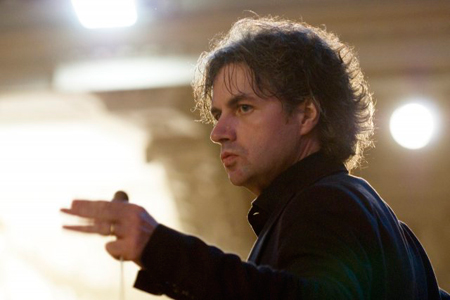 After his graduation in composition, piano and conducting, his most imporatant question was how to bring the dream come true: living for and by music. Daniele Belardinelli started up as a pianist, a composer, a rehearsal accompanist and a choirmaster, never failing to take any opportunity to gain experience. Two tours with Gustav Mahler Youth Orchestra marked a turning point in his life. For seven years, Daniele became the opportunity to assist and to rehearse this young orchestra which was very inspiring.

His first conducting engagements include the season concerts “Prima Verona” in Verona followed with many prestigious opportunities in Verona and other places such as:

„Le Donne curiose“ by E. Wolf Ferrari – season openic of the Philharmonic Theatre in Verona; the performance was broadcasted by the RAI TV

„Cimarron“ by Hans Werner Henze during Macerata Opera Festival, at Ravello Festival and at La Cavallerizza Teatro in Reggio Emilia – awarded with the Abbiati Prize

“Princessin Brambilla“ fromWalter Braunfels’s manuscript with the Cracow Philharmonic Orchestra at the Wexford Opera Festival (recordered and distributed by Naxos). This work has been rarely performed because of its musical and technical difficulty

„Campiello“ by E. Wolf Ferari with the Tokyo Philharmonic Orchestra at Bunkamura Orchardhall in Tokyo

Further engagements include concerts with the Marchigiana Philarmonic Orchestra – broadcasted by RAI international TV, concerts with the Roma and Lazio Orchestra, the Orchestra in Nancy, the Bratislava Radio Orchestra, Magna Grecia Orchestra and many others. Daniele Belardinelli was invited by the Fujiwara Opera – the oldest company in Japan – to conduct „La Traviata“ at the Bunkamura Orchardhall in Tokyo. In Warsaw (Teatr Wielki) he conducted „Il Rigoletto“ during two seasons.

Together with Marco Patrignani. Daniele Belardinelli organized an audition with the participation of 1300 musicians. The Italian Orchestra of Cinema (OIC), established at the Forum Village in Rome, was founded thanks to this experience. It wants to promote and represent the artistic inheritance of the Film Music, looking for and restoring the scores of the masterpieces of the great Cinema. Daniele Belardinelli was appointed the artistic director of this Orchestra. Nowadays, the Orchestra performs in multimedial events and records tracksuits. On the occasion of the European Feast of Music at the Capitol in Rome, the Orchestra performed “Neorealismo” film music in a multimedial concert broadcasted by the national television. Daniele Belardinelli conducted the opening ceremony of the 1st edition of Beijing Cinema Festival, broadcasted “live” from the great “National Center for The Performing Arts”. Following this event he conducted a symphonic-visual evocative double concert in the historical “Great Hall of the People”, seat of the Chinese Parliament, in Tienanmen Square. The event was broadcasted several times by the CCTV, the state television, and it was seen by more than one hundred million people. According to the Chinese government, it was the most important cultural event of the year. Daniele Belardinelli  During the Rome International Film Festival in 2011, he conducted the Italian Orchestra of Cinema in a production “Cinematology” which brought him the national and international recognition. On 14th of June 2012, the Orchestra conducted by Belardinelli played a musical performance dedicated to the cinema on the occasion of the celebrations of Queen Elisabeth Diamond Jubilee at the British Embassy – Villa Wolkonsky – in Rome. The Orchestra played while the most beautiful scenes from the most famous films were shown on the screen. Another special event was the 20th Anniversary of the Fondazione “Alberto Sordi”, at Auditorium Parco del la Musica in Rome. On that occasion the Orchestra have celebrated the big Italian actor Alberto Sordi, rewarded for his social involvement.

Recently, Daniele was a guest of the Human-Rights Center in Osaka. There he could experienced what he always believes in: because of its grace, its silence, its power to touch, the music can get into the heart, filling the generational gap, breaking down the walls between the nations and the ideologies. Music is the instrument of peace, hope, fraternity, universal values that make the life enjoyable.

In June 2012, Daniele Belardinelli conducted at the Carnegie Hall in New York. The programme in the Italian atmosphere included the works of the Lucan composer Egidio Romualdo Duni. In summer 2012 he conducted several performances of „La Traviata“ during the Macerata Opera Festival. Another important engagement was the “Cavalleria Rusticana” performed in cooperation with the Italian and Japanese musicians for a Human Rights Project. Further “L’Italiana in Algeri” in Geneva as well as concerts with the Kosice Philharmonic Orchestra with the violinist Julia Fischer in Kosice (European Capital in 2013) as well as at the Festival in Zilina (Slovak Republic).