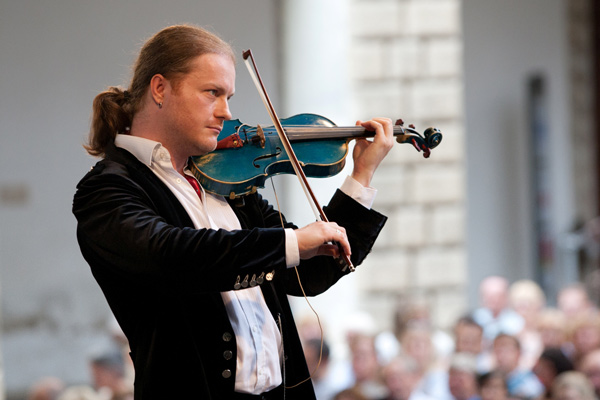 Exceptional World of the Blue Violin

The most distinctive member of the young generation of Czech violinists, “the fighting musician”, the top selling artist, PAVEL ŠPORCL has been reaping triumphs with audiences in major music venues worldwide, thanks to his formidable art combined with unorthodox platform presence.

He is a regular guest of television and radio studios, making appearances in virtually all media. His recordings have invariably shot up to top-selling positions.

He first took up violin at the age of five, subsequently to study it at the Prague Conservatory and Academy of Music (with Vaclav Snitil). From 1991–1996 he pursued his studies in the U.S.A., under the tutelage of outstanding teachers including Eduard Schmieder, Itzhak Perlman and Dorothy DeLay. Pavel Šporcl is the holder of various prizes and distinctions; he has to his credit an impressive discography, has appeared on concert platforms around the world, and has been working continually with a rich gallery of Czech as well as international orchestras. He is the sole young Czech violinist listed in the book by the world-renowned critic and music historian Henry Roth, Violin Virtuosos: From Paganini to the 21st Century.

Pavel Šporcl’s extensive repertoire comprises 40 violin concertos, and countless sonatas, chamber and virtuoso compositions. His performances are highly acclaimed by the audience and critics alike. In the press reviews of the inaugural concert of the Czech Philharmonic’s 2001/2002 season at Prague’s Rudolfinum (Dvorak’s Concerto for Violin and Orchestra in A minor) under the baton of Vladimir Ashkenazy, which was recorded and broadcast by both Czech Television and Czech Radio, critics lauded Pavel Šporcl as “a talent that is born once in a century…“ .

Pavel likes to go beyond the classical music scene and cooperates with many non classical music artists. His projects Gipsy Way (2008) and Gipsy Fire (2014) with gipsy cimbalom band has been received with great enthusiasm in many countries incl. China and was seen on almost 300 concerts by more than 120 thousand people. Another of his “off classical music” project is pop-crossover “Sporcelain” in which he shows his view on violin in 21st century.

Šporcl strives to bring the message of classical music to the broadest circle of listeners, and above all to the young audiences. He frequently performs in “instructive” concerts targeting secondary and higher education students, turning these projects into exceptionally popular occasions. For 2014 he has been nominated for Czech republic as Ambassador of Good Will.

Pavel Šporcl plays on blue violin built specially on his request by Jan Špidlen in 2005. He uses bows by Petr Aurednik and performs on Warchal strings.

“(Šporcl played)… with sweet lyricism and thrilling virtuosity” (Gramophone)
“Intelligence, musicality and virtuosity – Šporcl has it all” (Classics Today)
“Dazzling ability… wonderful Czech virtuoso” (The Strad)
„(Šporcl)… melts hearts by varying the pace hypnotically in slow crescendos before he turns on a dime, switches gears, and moves his audience to frenzy“(Strings)